No. 8: From Roman to Late Antique Butrint: The Evidence on Houses and the Topography of Urban Quarters (2 September 2022)

Abstract: Butrint, a multi-period urban settlement on the Ionian coast of south-west Albania, offers ample archaeological evidence on the change and transformation of the Mediterranean city at the end of the Roman period. Recent archaeological excavations in the peninsular lower town area of the so-called Triconch Palace, and on the Vrina Plain suburb on the southern side of the Vivari Channel, inform this subject from the perspective of secular residential buildings. Now published, these excavations chart the development and transformation phases of two large residential complexes from their construction in the early and late Roman imperial periods to their abandonment as areas of human activity in the late medieval period. This presentation will discuss the urban fabric of Butrint in the late antique period (c. AD300 to c. AD600) in the light of the evidence from these excavated domus, pieced together with other fragmentary clues on houses and associated residential facilities elsewhere at the site. Among the few known and archaeologically investigated examples in Albania and in the Balkans, the construction of these domus and their transformation in the late antique period shed light on the nature of houses and house-building, and on the overall changing topography of a small, but significant port-town that enjoyed trade and economic ties with the Adriatic and the wider Mediterranean region. 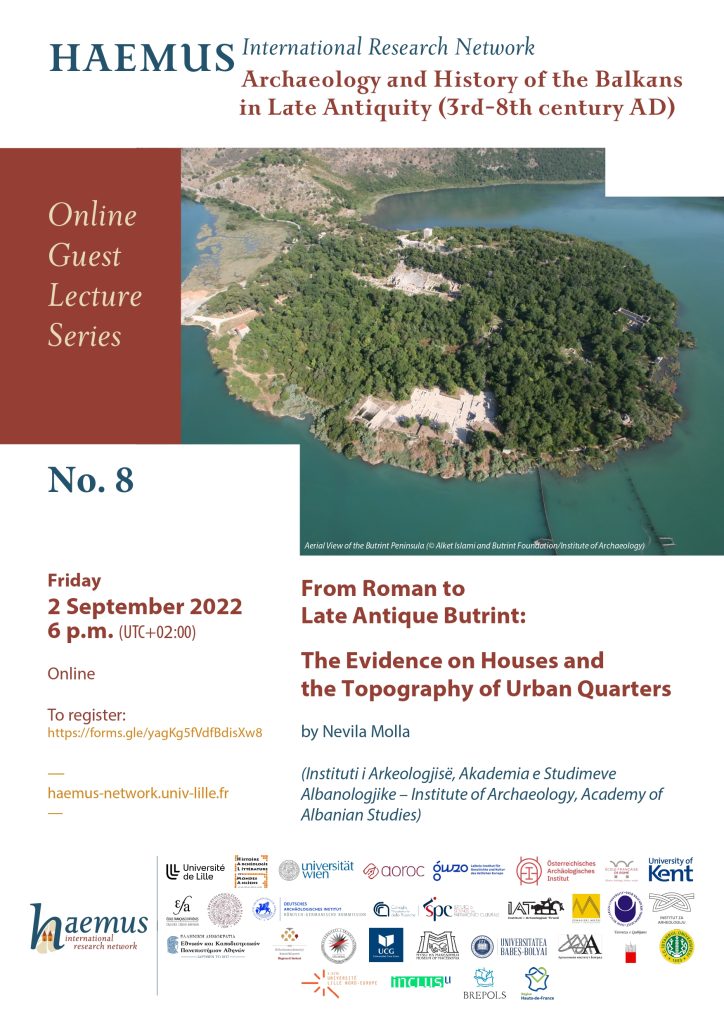 No. 7: Square and Rectangular Isolated Towers in Late Roman Dalmatia (27 May 2022)

by Josipa Baraka Perica (Sveučilište u Zadru – University of Zadar)

Abstract: The construction of towers in Late Roman Dalmatia is associated with the process of fortification, with the aim of establishing a defence line in protecting major communication routes, both on sea and land. Such a network of fortified settlements along the Eastern Adriatic coast and in Roman Dalmatia is usually referred to as a limes and it is associated with the idea of an imperial renewal during Justinian’s era. The strongholds that were a part of this system are testimonies of different architectural solutions: from sites that can be considered as genuine Byzantine towns to simple towers. This lecture will offer an overview of the archaeological sites on which square and rectangular isolated towers from Late Antiquity can be found. Their similarities in terms of architectural form suggest that they are the result of a well-planned project. In addition to their general plan, they also share a location on a highly strategical position, almost always close to an existing settlement. 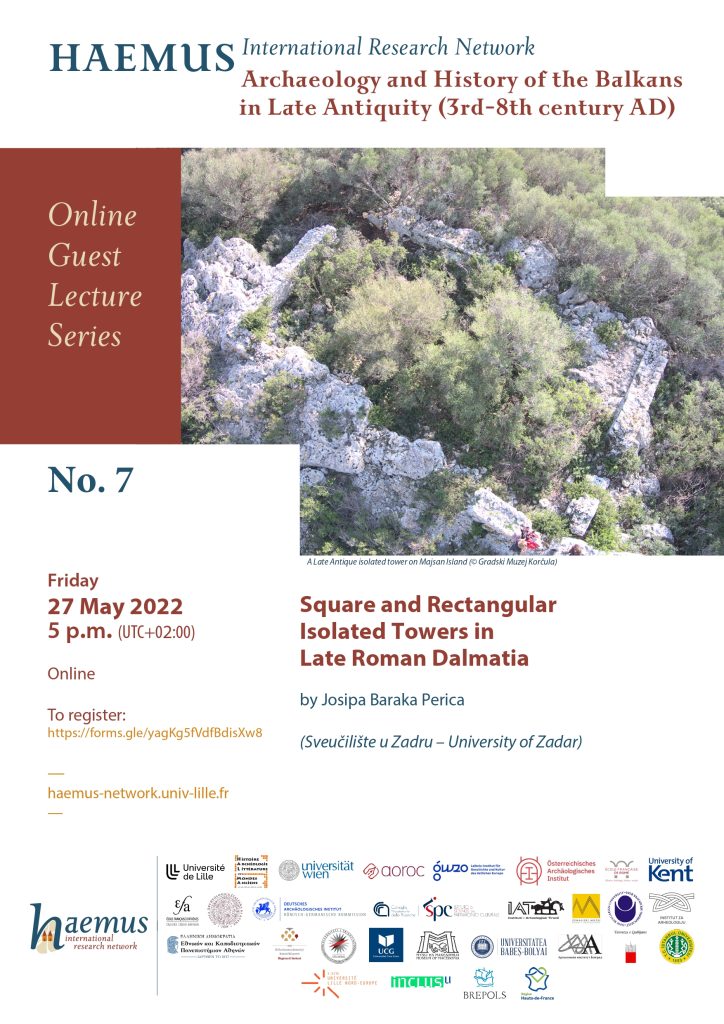 Abstract: This paper discusses the use of landscape fortification features at narrow passes and isthmuses, based on Procopius’ account about the Balkans in the fourth book of the Buildings. These are the pass of Thermopylae in Boeotia and the nearby mountain pass of Heraclea, the wall of the Corinthian Isthmus, the isthmus wall of the Pallene peninsula at Cassandrea in the Chalcidica, the Anastasian Long Walls of Constantinople, the Long Walls of the Thracian Chersonese, and the cross walls of Anastasiopolis and Topirus on the Via Egnatia. Based on the fact that most of these places are known to have been fortified in pre-Roman times, this paper will discuss when and how the late Roman army started to be interested in making use of them. It is argued that long walls started to be revived during the third-century crisis, but they acquired greater strategic significance under the Theodosian Emperors and down to the end of Antiquity. Most of them were maintained and used throughout the Byzantine period. 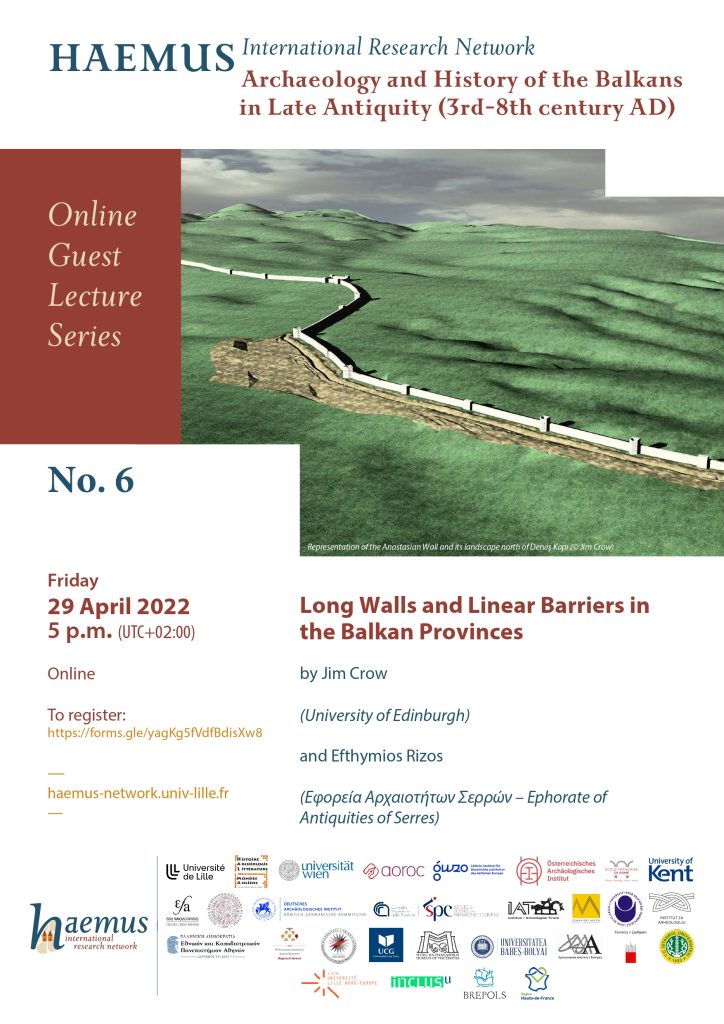 No. 5: Recent Research by the University of Bucharest on the Acropolis of Istros/Histria (Romania) (28 March 2022)

Abstract: This presentation will focus on the research undertaken by the University of Bucharest on the Acropolis Centre-South (ACS) Sector in Istros/Histria (Constanța County, Romania). Apart from basic information about the project itself (objectives, methodology, expected results, dissemination), we will present the Late Roman insula (6th-7th c. AD) we are currently investigating, namely its structure, stratigraphy, chronology and integration in the city’s Late Roman urban plan. The second part will be devoted to a brief overview of the investigations to which various categories of the archaeological material from the ACS Sector were subjected so far. The use of compositional analyses based on methods such as XRF (metal), PGAA (glass), and PIGE (ceramics), electronic microscopy and tomography for offering insights into patterns of production, technologies and consumption trends will be discussed. The third part will constitute a preliminary report on the ceramic material discovered on the sector. Even though the research is not yet complete, the data obtained so far represent solid evidence for the economic life and cultural contacts that characterised the ancient city of Istros/Histria during Late Antiquity. From a chronological perspective, the analysis of the ceramic material allowed us to establish more clearly the functioning period of our complex. 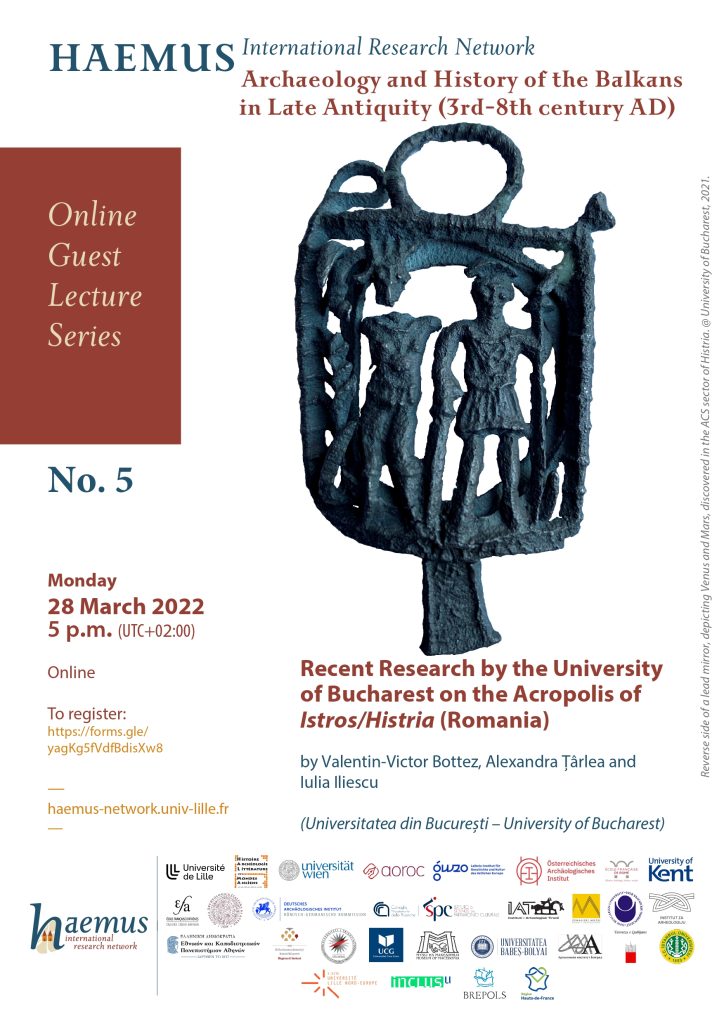 Abstract: The part of the frontiers of the Roman Empire that goes through Serbia is one of the most impressive sections of the limes and one of the longer ones. Although during the sixties and seventies of 20th century rescue excavations linked to the construction of Djerdap I and II were among the largest in Europe, the important discoveries made during them were almost completely forgotten afterwards. It’s only with the project of a nomination to the UNESCO World Heritage List that researchers started again to take a real interest in the Danubian limes and that they considered it as an essential part of the Roman heritage in Serbia. Thus, its archaeological sites are now thoroughly excavated, preserved and presented, especially through archaeological parks which aim to make them better known to tourists. Some of the most important sites that were submerged in the Iron Gate, considered to be destroyed by the force of the Danube, are even now again in the focus after being 50 years under the surface, and surprisingly they are still standing. 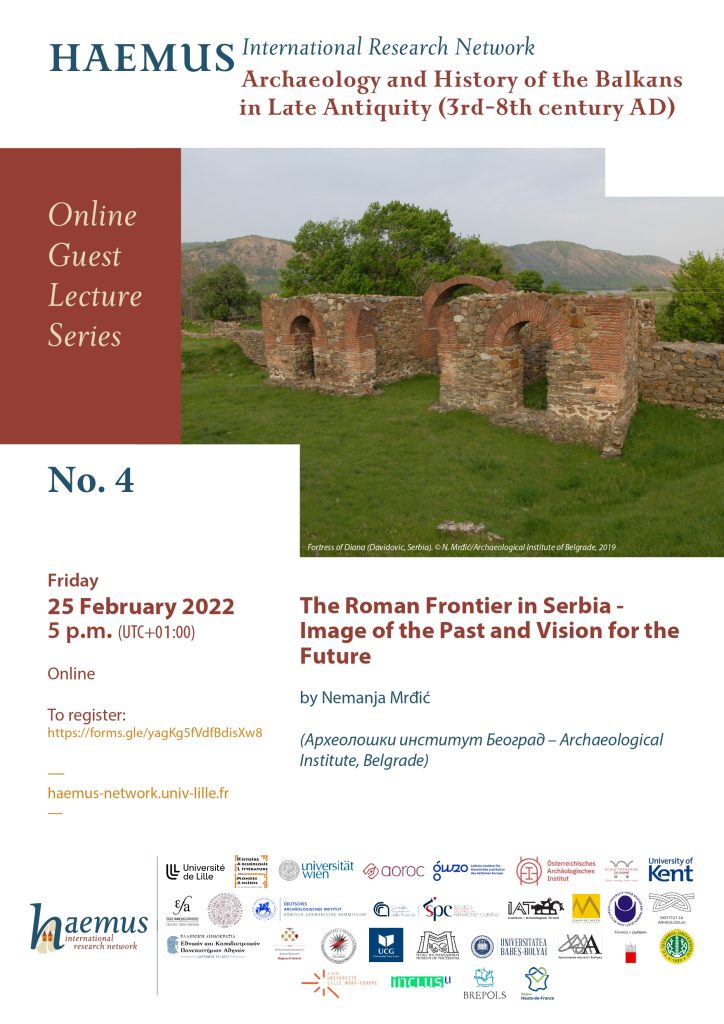 No. 3: Early Byzantine Military Equipment from the site of Biograci (Bosnia and Herzegovina) (10 December 2021)

Abstract: The systematic excavations of Gradina in Biograci near Lištica, west Hezeovina which were carried out during 1969 and 1970 under the leadership of Dr. Irma Čremošnik, resulted in the inclusion of a valuable site on the archaeological map of Bosnia and Herzegovina. According to the research of that time, Biograci was primarily interpreted as a Roman fortification dating from the 2nd-4th century, linked to a hilltop settlement with an Avar-Slavic phase. A recent reconsideration of the material kept within the Classical Antiquity collection of the National Museum of Bosnia and Herzegovina allowed the identification of finds from the early Byzantine and the Migration periods. Among them, there is a fragmented cheek flaps (paragnatide) from the Narona / Baldeinheim type helmet. The paper will be dedicated to the professional and scientific processing of the bronze sheet metal plate with traces of gilding, which, through comparison with the complete findings of helmets of the same type, was identified as part of our helmet. We will also look at the remaining parts of a lamellar armour also of the early Byzantine era. The appearance of the so-called western group of helmets known as the Narona / Baldeinheim type is extremely rare for the Migration period, while no helmet of this type has been found elsewhere in Bosnia and Herzegovina so far. The situation is the same with the lamellar armour. 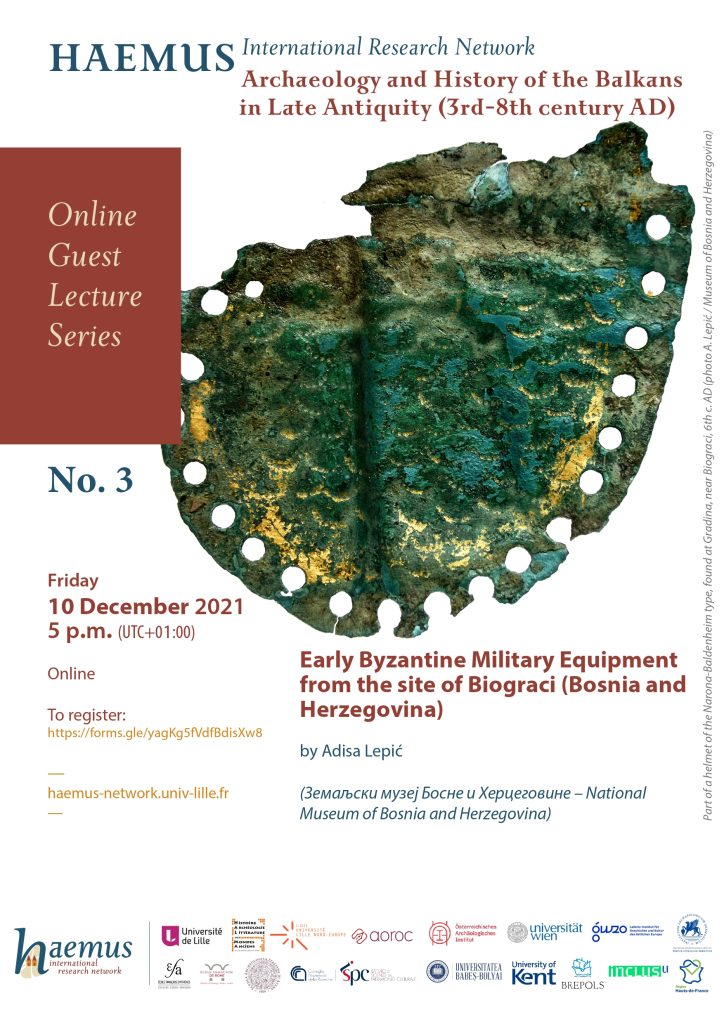 No. 2: The Roman Legionary Camp and Early Byzantine Town of Novae (Moesia Inferior/Moesia Secunda): 60 Years of Research or How We Are Doing 60 Years Later (22 October 2021)

Abstract: The Roman camp and Early Byzantine city of Novae (Moesia Inferior/Moesia Secunda) on the southern bank of the Danube River was the most important centre on the border of the Empire. During the long-time Polish-Bulgarian archaeological and interdisciplinary studies which began in the 1960s have made it possible to identify and analyse several elements constituting its urban and architectural uniqueness. The excavations in the central and western part of Novae are now undertaken within the framework of the Polish-Bulgarian scientific-research project headed by Evgenia Gencheva (NAIM-BAN, Sofia), Andrzej B. Biernacki and Elena Klenina (AMU of Poznań). The reconstruction of Novae started after the conclusion of the peace treaty in 382 with Goths. The Roman military camp was then reorganised into a city that expanded toward the east. Various workshops, which before had been located outside the defensive walls, were relocated inside the fortress. The urban population was only partly civilian, as the military administration and the legionaries were still living on the site. The establishment in the early-5th century of an episcopal see was also a significant event in the history of Novae. However, the most important event of the same century, which brought the most radical changes, was the attempt by the Goths, led by Theodoric, to establish the capital of their state in Novae. In the 6th century, Novae was a famous Christian centre in the Lower Danubian region. For example, the description of the entry of Petrus, the brother of Emperor Maurice (582–601), in Novae in 597, on the eve of the martyr Luppos, informs us about the importance of this saint in the region. Furthermore, the city remained an important centre for trade, craft, and religion until its abandonment in the early 7th century. 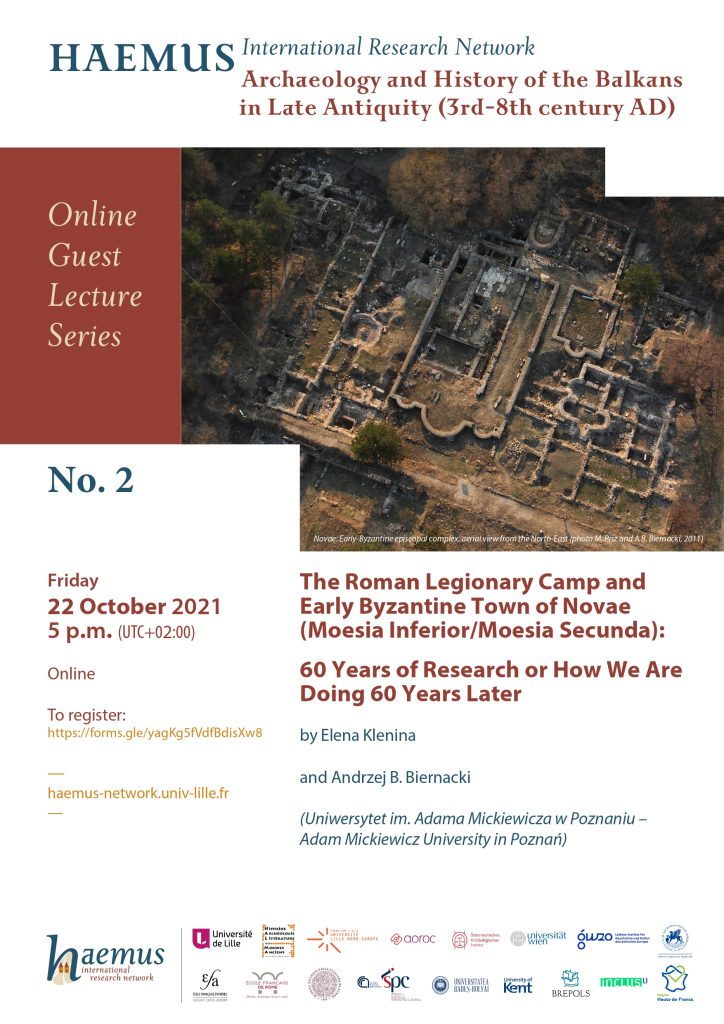 Abstract: Although the excavations have been going on for more than 100 years, the latest research in Caričin Grad (Justiniana Prima) has provided new data concerning the city's urban planning, the new basilicas and buildings, the large suburbs, as well as the fortresses and churches in the neighbourhoods and the route of the city's aqueduct. Important information on daily life were acquired through the excavation of large parts of the city's residential areas and the study of archaeozoological, archaeobotanical and archaeopedological remains. The new geophysical surveys and the latest excavations have provided new data concerning the first planning of the city, followed by the changes in urban layout and the settlement of new populations in the city. One of the most important results is the understanding of the latest strata of urban life. Research has revealed extensive destruction at the very end of the 6th century and restoration of buildings at the beginning of the 7th century, all dated by numerous coin finds. These changes were followed by a radical impoverishment of city life and the desertion of the settlement during the first half of the 7th century. The new project launched in 2019, which concerns the excavation of the Tetraconch discovered in the Lower city, will focus on the function of this important church and on its integration into the town's urban planning, as well as on understanding the brief existence of one of the most intriguing cities located in the heart of Illyricum. 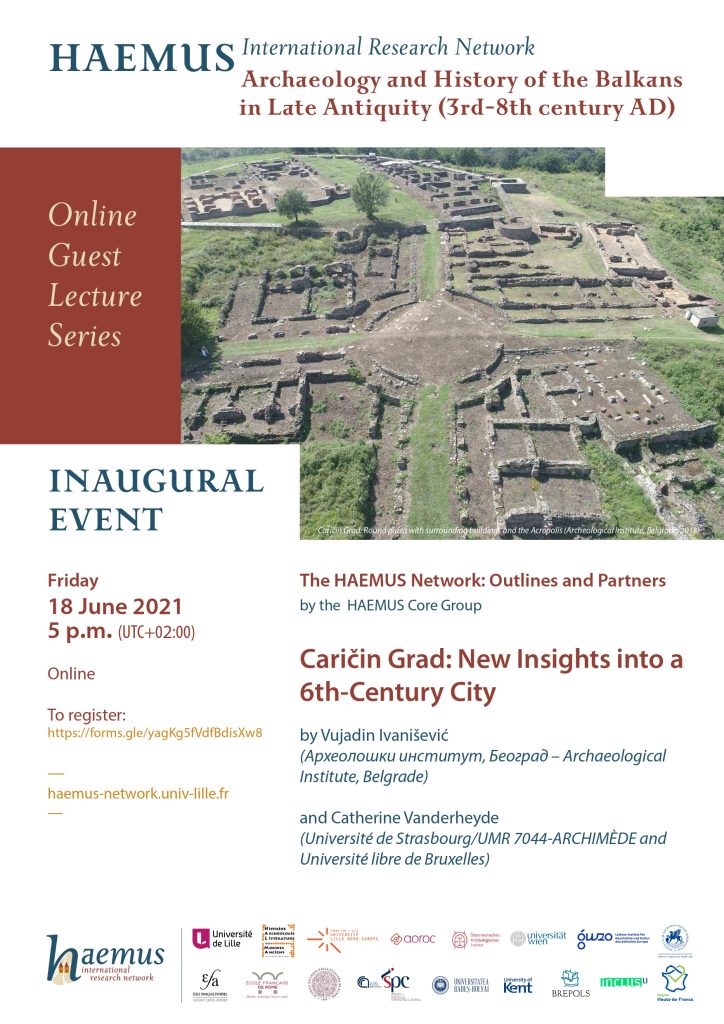